Learn more about these subjects with videos from respected institutions like NASA, The Royal Society, Desertec and National Geographic, and see real examples from across the world. 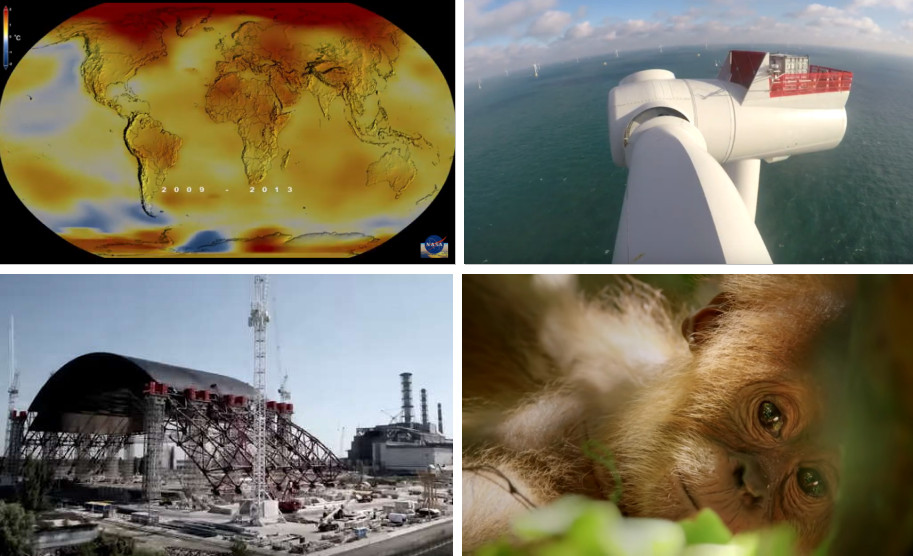 Fossil Fuels (coal, oil, gas) are a massive store of past solar energy in the fossilised remains of plants that grew millions of years ago, using the sun’s energy to build their bodies from the carbon dioxide gas CO2 in the air.

Burning them is releasing CO2, causing the Earth to retain more of the sun’s heat and warm up, threatening us with rising sea levels, desertification, mass migration and species extinction. Scientists know this through monitoring our planet in a host of ways, many of which are only possible with recent technology.

For example how can we know what Earth’s atmosphere was like tens of thousands of years ago? In our first film scientists in Antarctica work to extract ice cores from 3km deep in the ice shelf containing trapped ancient air.

Ancient Ice and Our Planet's Future

Scientists fly ice cores from Antarctica to Colorado to unlock the secrets of our planet’s past climate. National Science Foundation [4:37].

An introduction to climate change in 60 seconds. Royal Society and US National Academy of Sciences.

Causes and Effects of Climate Change

Global Warming Visually and in Graphs

For those who prefer graphs, see also this video based on findings from NASA’s Goddard Institute for Space Studies, analyses the different factors that could contribute to global warming: How global warming stacks up. NASA [2:55]

Renewable energy technologies are fast emerging that allow us to replace fossil fuels. They harness the movement of wind, rivers, tides or waves; or use the heat from the sun, volcanos or biofuels; or directly convert sunlight to electricity.

These technologies usually involve numerous identical units, making them suitable for mass production in factories with only routine on-site installation work. This plus genuine market competition between many manufacturers, is leading to rapid falls in cost.

Wind and solar are now well established – though they continue to undergo rapid development. Tide and wave are more experimental.

The latest huge wind turbines being installed off the coast of East Anglia, UK. Siemens Gamesa [2:08]

A shining light in the desert

The DESERTEC Foundation promotes Desert-Energy, that advances the Decarbonization of Europe, guaranties Africa clean prosperity and makes the Middle East independent from oil-income.

See also this video about a tidal barrage in South Korea: Sihwa Lake Tidal Power Station. Arirang Issue [7:47]. An area of sea is enclosed and water flows in and out through turbines in the barrage as the tide rises and falls. The proposed Swansea tidal lagoon is the same concept.

Nuclear Power - no thanks

A nuclear power plant is typically a massive 10-year+ project, involving complex, highly skilled, delicate site work. In operation the plants are uninsurable given the nightmarish safety risks and potential terrorism. These characteristics mean that costs tend to rise not fall.

Leaders who had to deal with the evacuation of towns and financial ruin that followed nuclear disasters, visited the UK to urge the UK government NOT to construct new reactors: Mikhail Gorbachev (USSR president during Chernobyl) and Naoto Kan, Japan’s PM during Fukushima. Ex-Japan PM: nuclear power remains unsafe and too costly.

A major concern is the link to nuclear weapons.  Former US Vice President Al Gore: “For eight years in the White House, every weapons-proliferation problem we dealt with was connected to a civilian reactor program“.

History of the accident, construction of the first sarcophagus by the Soviets, and its replacement by the new one completed in 2019. European Bank for Reconstruction and Development [23:19].

Features dramatic new footage from inside the reactor’s turbine hall and the operation to slide the New Safe Confinement into place. The UK contributed to the cost; it will no doubt pay up again when this sarcophagus wears out in an estimated 100 years time … it’s that or we get irradiated!

The meltdown at Fukushima Nuclear Power Plant in 2011, forced more than 160,000 people to flee the region along Japan’s northern coast, many never to return. CBS This Morning [4.28].

After Fukushima, all Japan’s reactors were shut for years and Germany decided to phase out nuclear completely (as Italy did after Chernobyl). Even by 2020 only 9 of Japan’s 54 reactors had been restarted. What would happen to the UK’s reactor fleet if a major accident occurred here or in France?

Extinctions are up to 1000 times the normal rate, as a result of human activity. In the last 50 years, the populations of all mammals, birds, reptiles and fish have fallen by an average of 60%.

Insects are becoming extinct eight times faster than mammals, birds and reptiles. They could vanish within a century, with catastrophic consequences for the planet’s ecosystems and for human survival.

Among the culprits are: habitat loss due to agriculture and climate change; hunting and fishing; pollution and pesticides.

How to Save Our Planet

How to Save Our Planet. WWF International [8:27]

Sir David Attenborough explains how humans can take charge of our future and save our planet. We and our domesticated animals account for 96% of the mass of mammals on Earth. Act to protect the wildlife that still remains.